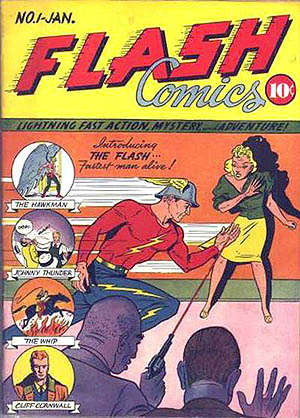 All forms of popular entertainment draw on their past for inspiration. Looking backward and manipulating ideas for a then current audience can be found in music, film, and any fine art medium. Comics are certainly no different in this regard; as we transition from the Golden Age to the Silver Age many characters lying dormant were reawakened and given new life.


The end of the Golden Age saw a decline in the number of super hero titles being published. Romance, horror, westerns, crime stories and other non-super hero titles came to the fore and were the staple of the industry during this post-WW2 period. The decline and change in emphasis was a response to reader interest, as sales decreased the industry sought new ways to remain viable. This was a dark time for comic publishers, the ushering in of the nuclear age, two major wars nearly back to back, the increasing popularity of television, and other factors impinged on sales. Attempts to diversify subject matter within the medium was seen as a way to keep comics alive, idealism and nationalism gave way to grittier stories in the hopes of keeping an ever dwindling audience interested.


The Silver Age of comics (1956-1969) is a period of revitalization through manipulation. DC’s editor Julius Schwartz made the decision to have his in house artists and writers take characters already established within DC’s universe and give them another round; one with all new origins and costumes. The general consensus has the Silver Age starting with DC Comics Showcase #4 (October 1956), appearing in this issue were “Turtle Man” and the return of the World’s Fastest Man: The Flash. The Golden Age Flash (Jay Garrick) first appears in Flash Comics #1 (January 1940) and was a DC staple appearing as a member of the Justice Society of America (JSA), in a solo title All Flash and in All Star Comics. Showcase #4 introduced Barry Allen as the new Flash. With no ties to Jay Garrick (who is mentioned as a comic character and not really having existed) Barry Allen’s Flash as envisaged by comic legend Carmine Infantino had a new origin, new look and was ready to (pardon the pun) run sales through the roof. 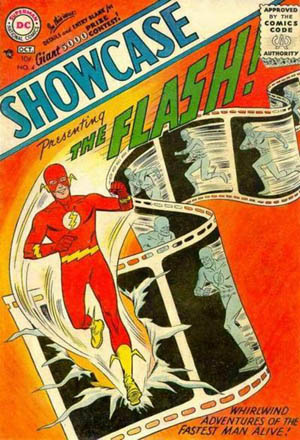 Showcase would become a center piece for re-introductions of several characters (as with the Flash in new incarnations) including a new Green Lantern. Another convention revisited early in the Silver Age was hero teams. Non powered teams included the Sea Devils and Jack Kirby’s Challengers of the Unknown (both premiered in Showcase). Another team (this one with super powers) of note first introduced in another title (Brave and the Bold #28, March 1960) was a serious hit for DC; The Justice League of America.[1] Drawing its inspiration directly from the Golden Age Justice Society, the Justice League (brainchild of Gardner Fox) quickly took off and became a title in its own right. 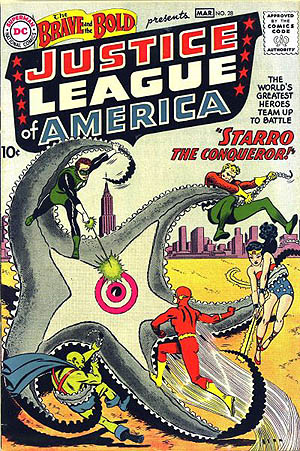 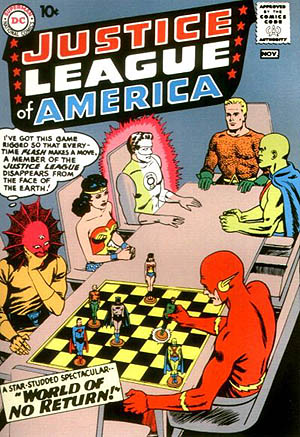 The success of the JLA spurred another legend none other than Stan Lee to devise a super hero team of his own for Marvel Comics. Thus was born The Fantastic Four (Fantastic Four #1, November 1961.) Penned by Lee and drawn by Jack Kirby the Fantastic Four was a watershed moment. Instead of the tried and true formulas of the past, where heroes simply defeated evil and then moved on to the next adventure, Fantastic Four gave us characters (Reed Richards/Mr. Fantastic, Sue Storm/Invisible Woman, Johnny Storm/The Human Torch, and Ben Grimm/The Thing) with relatable human problems. 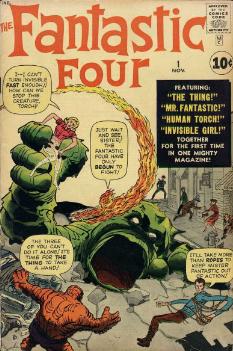 The team of Stan Lee and Jack Kirby were responsible for much (but certainly not all, DC fans) of the Silver Age resurgence of the comic medium, devising some of the most popular comic characters to date. Besides the Fantastic Four, Lee and Kirby also co-created The Amazing Spider-Man, The X-Men, The Incredible Hulk, The Mighty Thor, The Invincible Iron Man and the Silver Surfer. While Lee was strictly a Marvel Comics man, his partner Jack Kirby was a pivot working for both Marvel and DC. As previously noted Kirby did the writing and artwork for DC’s The Challengers of the Unknown (first appearing in Showcase #6, February 1957), a title in which non-powered humans sought to right wrongs, and defeat the forces of…you know where this goes![2]  The team led by jet pilot Ace Morgan and featuring mountain climber Red Ryan, Olympic wrestling champion Rocky Davis and master diver Prof Haley, offered an alternative to the near invincible super hero archetype.[3] 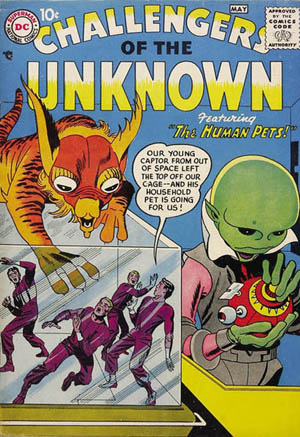 One conventional comic style that survived the golden-silver transition was the war comic. Golden Age examples include G.I. Combat and Star Spangled Comics, which were mostly compilations or one off stories. The Silver Age war comics attempted to forge recognizable and continuing character sets that were easily identifiable. Examples from this timeframe include Sgt. Fury and his Howling Commandoes (#1, May 1963) and Sgt. Rock and Easy Co. The latter penned by Robert Kanigher beginning with issue #81 of Our Army at War, would eventually have the title changed to Sgt. Rock (with issue # 302.) Kanigher’s writing was bolstered with art work by the incomparable Joe Kubert and (later by) Russ Heath. 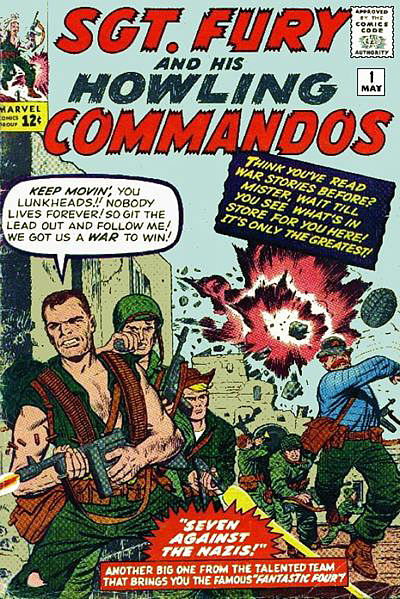 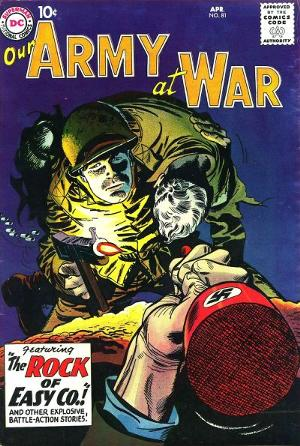 All of the editors, writers and artists mentioned herein were working in the industry during the Golden Age and continued to do so for many years after the Silver Age began. By allowing the medium and characters to evolve and adapt to an audience that was looking for something new (yet…still old), they helped to ensure that comics had a future. We may see the “new” super hero movie of the moment as a natural choice to bring to the big screen, but in fact if not for pioneers who were willing to rework the past, we might be stuck with one hell of a lot more chick flicks. Dude, keep that in mind when next gazing upon your lovely little comic collection. So next time I will be bringing you a public service/informational piece as I break down levels of Geekdom, til then kids, keep ‘em bagged and boarded!

[1] The team as it first appears in Brave and the Bold #28 members shown include Wonder Woman, Martian Manhunter, Aquaman, Green Lantern and the Flash. While neither Superman nor Batman appears in the issue it is indicated that they are already members of the team.
[2] Please note that the ever restless Kirby only worked on the first eight issues.
[3] On occasion female adventurer “June Robbins” was included in the cast.
Posted by Unknown at 11:06 AM