Crime Does Not Pay…unless you’re a Comic publisher! 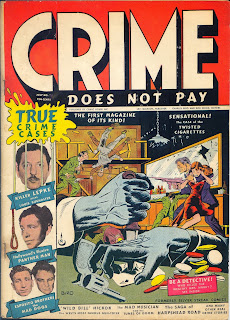 
Okay so it has been a while since the last “bubble” popped, I hope you forgive me and enjoy this little piece J


Many of us are aware of the early heroes of Comic-dom, the Batman’s, Superman’s and Captain America’s, but what about the bad guys? So all that evil rooting around out there should have no voice? No point of reference for the young and aspiring villain? How are we to have real, honest to goodness megalomaniacal, world conquering evil uber-mensch’s without some training manual to foster all that pent up aggression? 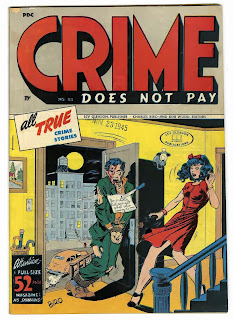 
Never fear faithful reader, publisher Lev Gleason insured that the infant (Pinky and the) Brain’s, Lex Luthor’s and Victor Von Doom’s of the world had something to read under the covers, by flashlight, away from the prying eyes of a world bent on destroying their hopes and dreams just like the rest of us!


The year is 1942 and noting this dreadful void, publisher Lev Gleason, creators/editors Charles Biro[1] and Bob Wood[2] set out to correct this horrible wrong. Their baby Crime Does Not Pay was different from other comic books of its time. The Dick Tracy’s and Batman’s of the world went around fighting crime, and the story was always told from their point of view. CDP was the first time the villain truly took center stage. 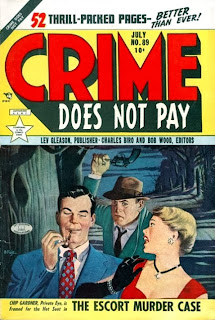 
Each issue, essentially a Condemnation des banquets style morality play, highlights a different “real life” villain (Machine Gun Kelly for example or some lesser known criminal) and shows how their life away from the mainstream led them to commit their injustices. The payoff for their transgressions was of course death, and invariably a gruesome one at that.


Gruesome was the name of the game for CDP, with lurid, uncensored and sensational tales the comic and the “True Crime” genre of comic books took off with a vengeance. In response to the growing popularity of comic books and their purported effect on the youth of America, in classic comic style, a villain of epic proportions manifested itself. Destined to truly ruin good comics for everyone, the nefarious Dr. Fredric Wertham, and his death-ray/doomsday book Seduction of the Innocent, appeared on the scene.[3] In a move calculated to suck the joy out of comic reading Wertham’s work propelled itself into the American consciousness, pretty much ripping out the heart of good old fashioned American comic entertainment- if that isn’t evil kids, I don’t know what is-.


Wertham’s work led to the introduction of the CCA or Comic Code of America, essentially an industry led censorship program that ensured parents their children were reading “wholesome” entertainment. It was also the death knell of many great comic books, including Crime Does Not Pay. Unable to maintain a readership with a kinder, gentler villain, as its centerpiece CDP inevitably folded. CDP begins with issue #22 (taking over the numbering from Silver Streak Comics) in June of 1942, begins its decline with its first CCA issue #143 in March of 1955 and dies an ignoble “villain light” death with issue #147 in July, 1955 (Lex Luthor says “geez thanks Doc!”) 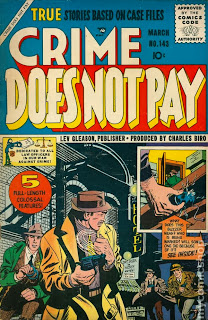 
Just so our villain doesn’t get the last…maniacal laugh…I invite you to read this journal piece by Carol Tilley that repudiates many of Wertham’s “evil” claims…who says the good guys never win?[4] Until next time kids, keep ‘em bagged and boarded!!